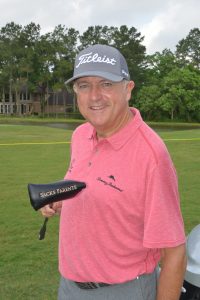 Ken is playing a tour prototype model Series 66i, which is a cavity back blade putter featuring the company’s patented Ultra-Low Balance Point (ULBP) technology. This particular putter has an extremely high moment of inertia attained by putting over 100 grams of tungsten in the extreme heel and toe. Since putting the putter in play in late March, Ken has had two top ten finishes and has moved to #3 in Overall Putting Average and #3 in 3-Putt Avoidance on the PGA TOUR Champions.

“This putter really helps you feel the ball when it comes off the face,” commented Duke. “There’s no bouncing, rolling end over end the second you hit it. It’s really nice. I’m thrilled to have finally found a putter that feels great and gives me a tremendous amount of confidence every time I stand over a putt.”

“We congratulate Ken on his finish at the Senior Open Championship,” said Rich Parente, Co-Founder of Sacks Parente Golf. “His putting is consistently improving, proving that our ULBP technology works! We are honored to have a player of his caliber on our team, helping us refine the Series 66i putter, which will be released in the near future. I’m more excited about our Sacks Parente technology than any other technology I’ve been involved with, including Callaway.”