Parks cards final round three-under-par 69, earns exemptions into the Meijer LPGA Classic for Simply Give and the Dow Great Lakes Bay Invitational

Parks earned an exemption into the Meijer LPGA Classic for Simply Give (June 16–19) in Grand Rapids, Michigan, as well as an exemption into the Dow Great Lakes Bay Invitational (July 13–16) in Midland, Michigan. She selected Anita Uwadia, an alumna of THE JOHN SHIPPEN from Fort Worth, Texas, to compete alongside in the Dow GLBI, which is a two-player team event.

“This is the first win for me for 2022. THE JOHN SHIPPEN has been great to me, so to give them a win is something magical,” Parks said. ”It means a lot.” 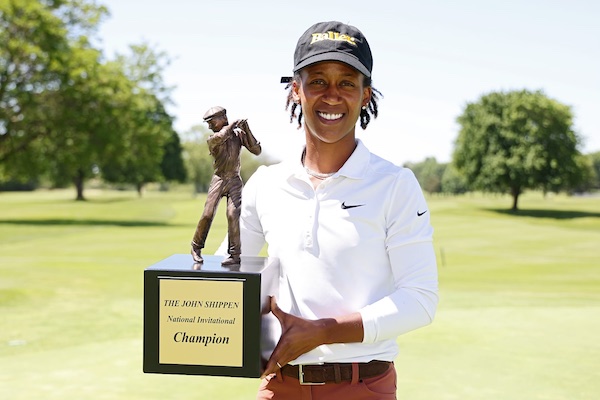 Parks carded a first round one-over-par 73 and started the final round four shots back of first round leader Uwadia. Parks used four final round birdies, including three on the final nine holes, to propel her to a three-under-par 69 and the tournament title. Her 36-hole total of 142 was two strokes better than Lakarerber Abe and Georgia Oboh, who tied for second. Uwadia was fourth, shooting 69-77—-146.

Parks said she is looking forward to the opportunity to play as a sponsor exemption in the Meijer LPGA Classic for Simply Give and Dow Great Lakes Bay Invitational.,

THE JOHN SHIPPEN, designed to showcase Black amateur and professional golfers, is named after John Shippen, Jr., who was the first American-born golf professional and also the country’s first Black golf professional. Shippen was bestowed PGA of America membership posthumously in 2009.

For updated information on THE JOHN SHIPPEN, please visit www.thejohnshippen.com/and follow us on Facebook and Instagram (@TheJohnShippen) and on Twitter (@TheJShippen). For information about sponsorship opportunities or how to get involved, email us at THEJOHNSHIPPEN@intersportnet.com.

Since 1985, Intersport has been an award-winning innovator and leader in the creation of sports, lifestyle, culinary and entertainment-based marketing platforms. With expertise in Sponsorship Consulting, Experiential Marketing, Hospitality, Customer Engagement, Content Marketing, Productions and Sports Properties, this Chicago-based Marketing & Media Solutions Company helps their clients to create ideas, content and experiences that attract and engage passionate audiences. To learn more about Intersport, visit www.intersport.global, like us on Facebook or follow us on Twitter and Instagram.

Woods & Watts Effect is an equity and inclusion consulting firm of transformation engineers, co-founded by Sommer Woods and Michele Lewis Watts, Ph.D. They are a solutions-driven team that adeptly designs programs that assess a company’s strengths and areas for improvement relative to inclusion and social equity. Woods & Watts Effect is innovative in their thinking, their engagement and their execution. Through a bold, non-traditional and engaging approach, they produce viable and actionable solutions for sustainable change. More information is available at WoodsWattsEffect.com.

Rocket Mortgage moved its headquarters to downtown Detroit in 2010. The company generates loan production from web centers located in Detroit, Cleveland and Phoenix and operates a centralized loan processing facility in Detroit. Rocket Mortgage ranked highest in the country for customer satisfaction for mortgage servicing by J.D. Power the past eight straight years, 2014 – 2021.

Rocket Companies, Rocket Mortgage’s parent company, ranked #7 on Fortune’s list of the “100 Best Companies to Work For” in 2022 and has placed in the top third of the list for 19 consecutive years.