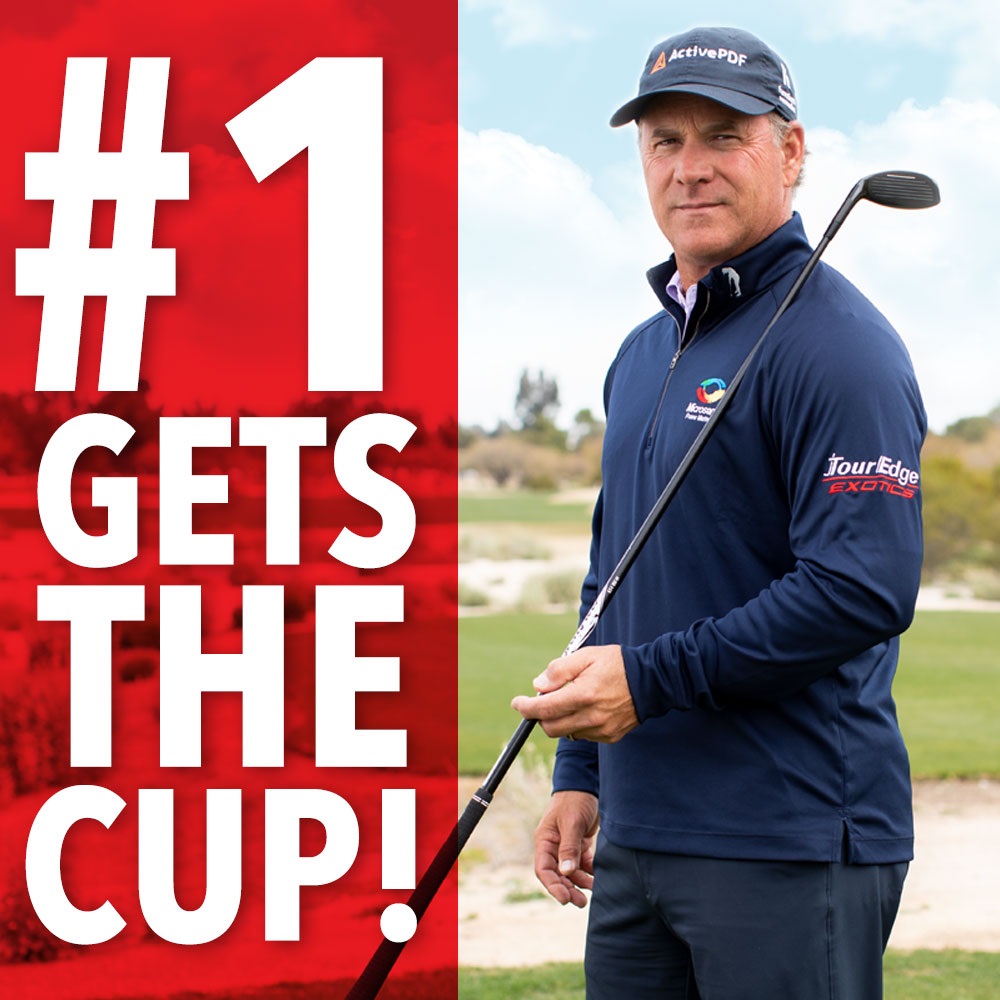 Tour Edge ranked as the No. 1 Most Played Utility Iron at Championship Event

It was an incredible season for Tour Edge staff professional Scott McCarron. He had been the No. 1 ranked player on the PGA Tour Champions since his first win of the season in April.

On Sunday, he clinched the PGA Tour Champions season-long Charles Schwab Cup for the first time in dramatic fashion after watching an amazing hole-out seal his championship season.

The hole-out was not his, but rather a Playoff hole “walk-off” from 123 yards by Jeff Maggert to defeat the only player left who could lay claim to the Cup with a victory at the championship.

McCarron was watching the playoff drama and the hole-out that secured the Schwab Cup and its $1 million bonus from the comfort of the Phoenix Country Club clubhouse.

There were five players who had a mathematical chance to win the Schwab Cup trophy this week; the top two point leaders who could win without a victory and three others who had to win the tournament and get help from the leaders to win the Cup.

McCarron said that winning the Schwab Cup was the culmination of “an incredible 4 ½-year journey” that includes five wins since becoming a Tour Edge staff player.

Three years ago, McCarron finished fourth in the season-long Schwab Cup points standings. He finished third two years ago and he finished second last season as he established himself as the player to beat on the PGA Tour Champions.

McCarron, who wears a Tour Edge Exotics logo on his sleeve, capped off a career year with the final 1st place ranking for the 2019 season that comes with a $1 million bonus and the first Schwab Cup of his career.

“I think it’s good to recognize the players that have played well all year long,” said McCarron, who won three times this year; the Mitsubishi Electric Classic in Duluth, Ga., on April 21; the Insperity Invitational May 5 in Texas; and the Mastercard Japan Championship on June 9 and also led the Tour with 14 Top 10 finishes.

In all, Tour Edge had five players out of the Top 35 playing their clubs at the championship event.

In the last six events of the season, Tour Edge was in play for 27 Top 25 finishes and experienced a wide array of their products in play, including drivers, fairway woods, hybrids, iron-woods and putters.

Tour Edge staffer Tom Lehman finished the season ranked 23rd while winning the season-opening Mistsubishi Electric Championship at Hualalai, his second win with Tour Edge in as many years.

Tour Edge staffer Duffy Waldorf finished 38th in the final standings with his three Top 10’s and 13 Top 25’s this season.
Tour Edge has surpassed 650 clubs in play on the three PGA Tours over the last two seasons. In that time, they have earned over 50 Top 5’s and over 200 Top 25’s in the bags of over 85 different PGA Tour professionals.

Tour Edge clubs have been in play for 27 wins or runner-up finishes in the last 50 PGA Tour Champions events played.

In 1986, David Glod founded Tour Edge with a focus on offering golfers with high quality and technologically advanced golf products that were as cutting edge as they were affordable.

Glod is considered one of the preeminent master club designers in golf club design and has led Tour Edge to be a Top 10 manufacturer in every club category.

Tour Edge products have been put in play on the PGA TOUR, PGA Tour Champions, LPGA Tour and Web.com Tour, as well as European professional tours, and have been in play in every PGA TOUR major championship and in Ryder Cup competitions.

Tour Edge, an American owned and operated company for more than 33 years, manufactures and sells golf clubs under three distinct brand names: Exotics, Hot Launch and their Get in the Game products.

All Exotics and Hot Launch clubs are hand built in the United States in Batavia, Illinois and then distributed throughout the world.

Every Tour Edge club comes with a Lifetime Warranty and a 30-day play guarantee.