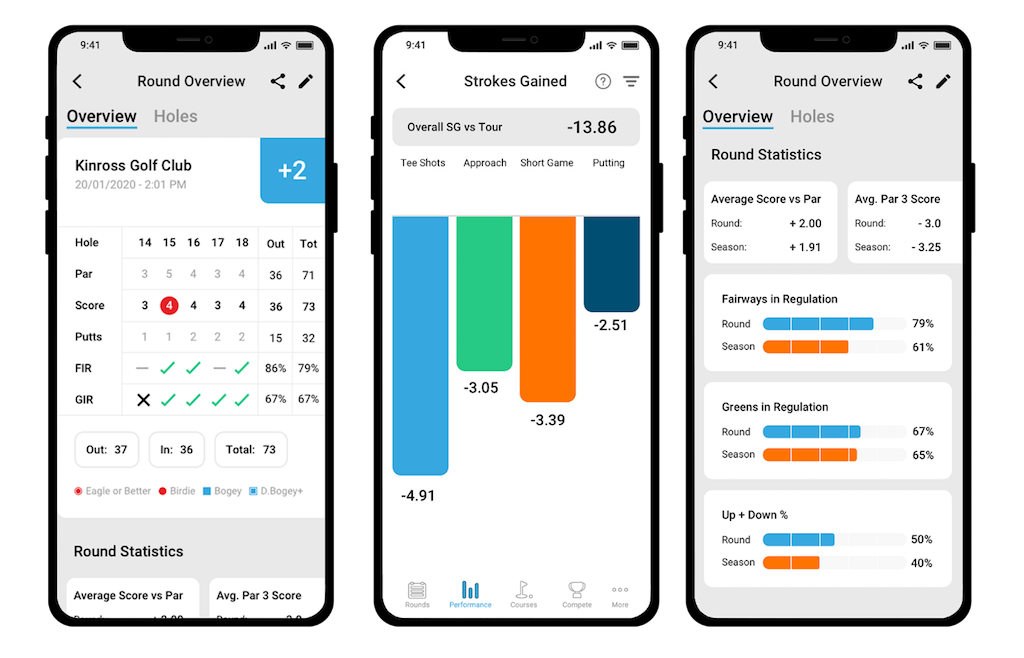 Edinburgh, UK –  Shot Scope (www.shotscope.com), a leading international manufacturer of GPS-based golf management systems, today announced a series of upgrades to its platform, allowing users to review ‘strokes gained’ data for all facets of their game on the mobile app.

Strokes gained is a way of analyzing where a player sits when comparing every aspect of their performance with other players within a dataset. This approach to performance analysis will allow Shot Scope users to gain a greater understanding of which areas of their game they may need to work on in order to improve their overall scoring average. This is accomplished by isolating individual aspects of a player’s game and comparing it to the entire Shot Scope dataset to deliver efficient results.

The release of strokes gained on Shot Scope’s performance tracking platform is complemented by a more comprehensive update to the Shot Scope apps, including new performance pages, round overviews and social features.

Strokes gained capabilities will be released gradually onto the Shot Scope platform in three separate phases. Phase One, which will go live on January 27th, will be a strokes gained overview release, benchmarking users’ statistics against Tour golfers.

The overview gives strokes gained for tee shots, approaches, short game, putting for individual rounds and includes filters such as the last five or 10 rounds. For all Shot Scope users, strokes gained will be backdated to include previous years’ data (75 million + shots) to ensure the best possible experience.

The second phase of the Shot Scope strokes gained rollout, expected in early spring, will expand on the initial release, integrating trends and insights to support golfer performance. This phase will allow Shot Scope to break down front-nine and back-nine strokes gained data, while providing more in-depth analysis on each quantifiable category. For example, information on tee shots over a period of time, tee-to-green statistics and tee shots by hole distance (the same sub-categories will apply to approaches, short game and putting).

The final phase of implementation will allow Shot Scope users to benchmark their performance against golfers of a similar handicap. Initially this will be in categories of 0-5, 5-10, 10-15, 15-20 and 20-25, with more specific handicap updates being made available via software updates in the future. Phase three is expected to be introduced by June 2021.

“This is a really important progression for our performance tracking platform,” said Shot Scope CEO, David Hunter. “We have taken user-feedback on board and have acknowledged that strokes gained is a hugely important aspect of game improvement.”“The ability for golfers to assess their game against others at the touch of a button will really help them to identify areas of their game that need to be developed, ultimately helping them play better golf.”

Shot Scope V3 users have unlimited access to Tour-quality performance statistics with the touch of a button. More than 100 different analytics can be reviewed via the Shot Scope V3 mobile app or Shot Scope’s online dashboard on different clubs, tee shots, approaches, short game and putting.

For more information on Shot Scope products and accessories and to buy, head to www.shotscope.com.