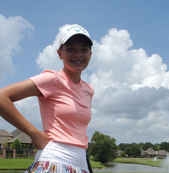 The 2020 winner of the Pepsi Little People’s “Spirit of Giving” Award is 12-year-old Sophia Macias from Denham, Springs, LA.

The “Spirit of Giving” award was established in 2011 to honor John Howerton, a Little People’s Board member who passed away unexpectedly.  John was a great ambassador for Little People’s, establishing many friendships with players and families.  The award is in memory of John’s giving spirit.

Sophia started playing golf six years ago, and noticed a lack of junior golfers in her area.  Her parents suggested that she might try to inspire kids to play golf, and with the help of her parents, Laura and James, her charity “No Worries, Just Birdies” was born.

Her golf club, Greystone Golf and Country Club, has gone from a handful of junior golfers to more than 30.  “Sometimes, people just need a little bit of help or boost,” Sophia says.

Sophia also enjoys teaching kids the game of golf, and hosted a free all girls golf clinic last May, with more than 25 girls participating, along with several former collegiate female instructors.

“I can not wait to start the charity events back up after Covid goes away because I know that we can spread the game of golf in our community even more,” said Sophia.

Both parents describe Sophia as determined and driven.  “When she makes up her mind that she is going to do something, it gets done “ said mom Laura.

Sophia was also the winner of the 2019 Peggy Kirk Bell Award, which honors Mrs. Bell, the true legend, local icon and golf pioneer who lived in Pinehurst.  The winner is chosen based on their demonstration of outstanding philanthropy and inspiration through their efforts on and off the golf course.

Sophia is the 9th winner of the Little People’s “Spirit of Giving” Award.  Congratulations, Sophia!