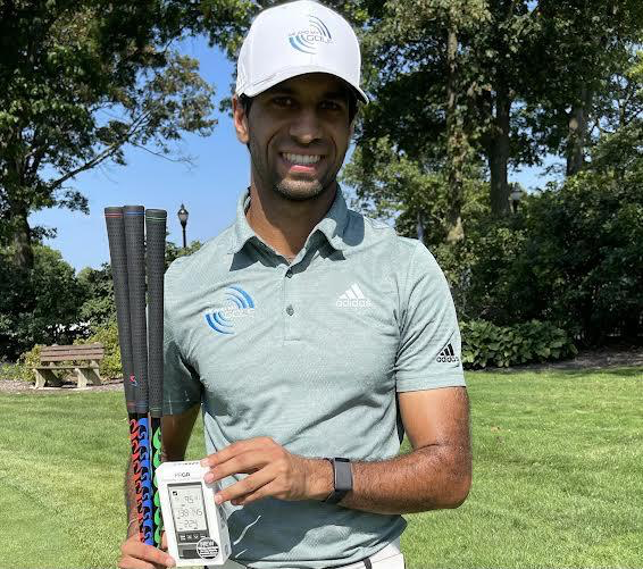 European Tour Winner and new PGA Tour Pro Aaron Rai has made some serious gains in driving distance over the last three years. This past weekend Aaron finished 3rd in the Korn Ferry Tour finals and earned his tour card. His recent success stems from his three main areas of focus the past few years. Strength and conditioning, changing his focus and intention to more speed and distance on the course, and performing focused OverSpeed training using SuperSpeed Golf.
Piers Ward from Me and My Golf has been working with Aaron since he was 10 years of age and shared some of Aaron’s backstory.

“We had periodically worked on distance gains but it was always difficult to fully commit to this as Aaron’s “Super Power” is accuracy. Due to this perceived advantage, he didn’t want to compromise how straight he hit it off the tee by chasing more speed.

The turning point came when Aaron began playing in top tier professional events and saw how much his lack of distance put him at a disadvantage. Aaron has been in the Top 5 for fairways hit since he started on the European Tour in 2017 but never cracked the top 100 for driving distance.

Through analyzing his stats which showed where he was losing strokes compared to the field, Aaron agreed in 2018 to make the commitment to distance knowing the gains would help significantly.”

We were also able to get some insight on Aarons fitness regimen from his trainer Andy Caldwell.
“ One of our key aims, when we conducted a season review for Aaron, was to improve his clubhead speed which we have managed to achieve through strength and speed training. We first worked toward building robust and efficient movement patterns and developed a system that can tolerate the cumulative and peak acceleration and deceleration loading forces required for the rigors of professional golf. From here we then integrated speed training to optimize the outcomes he would gain from golf-specific speed training. Superspeed training aids are now part of his weekly routine of training, warm up, and tournament preparation.”

As you can see below there have been significant increases in distance on the European Tour the past few years.

Aaron now has an on-course cruising speed between 113 mph and 115 mph. This would not have been possible 5 years ago when his max on course speed was 109 mph. To continue Aaron’s rise in the game he’s targeting an on-course cruising speed of 120 mph within the next 2 years. This target should be more than attainable if he sticks with his fitness routine and pairs it with continual use of his SuperSpeed Training System.

The team that Aaron has surrounded himself by couldn’t be happier with the gains that he has made and are very excited for the future of which SuperSpeed is very much a big part of.