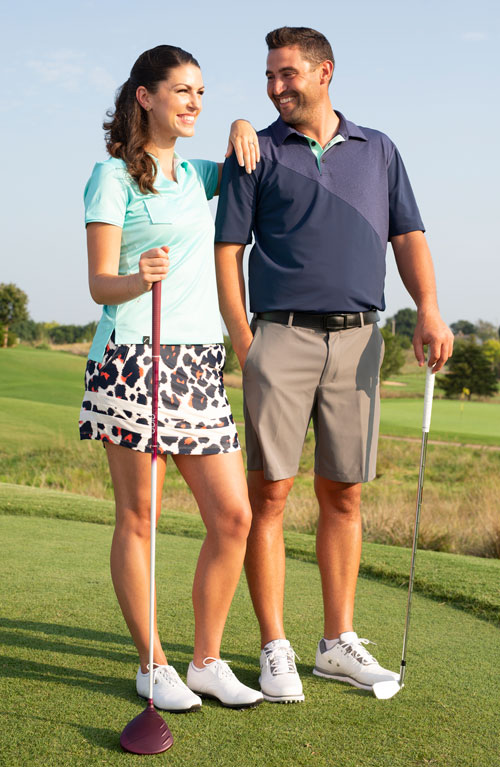 PHILADELPHIA, Pa. – There is no doubt that the number one concern of golfers is to play well. But a close second, for many golfers, is to look good … on and off the golf course.

That is the mission of the two affiliated companies – SwingDish and Covel.

SwingDish is the innovative line of women’s sportswear created by renowned athletic apparel designer Tricia Covel. It was launched in 2013 and has taken the golf industry by storm. A luxury women’s golf apparel brand, the focus of SwingDish is to provide revolutionary designs that are functional and feminine for fashion-conscious women.

In 2020, inspired by her husband – country music star Toby Keith – to create a line of men’s sportswear, the Covel brand was launched. The vision was simple, to create a men’s line that outshines the competition in all categories: fit, fabric and design.

“Simply put, my Covel golf shirts are the most comfortable golf shirts I have ever worn,” explains Traveling Golfer host Tony Leodora. “And the styles are amazing. Every time I go out, wearing a Covel shirt, I receive comments about how good-looking it is.”

Understandably, founder Tricia Covel is very excited by the rapid growth of her company.

“The response that we saw from the golf community when we stepped onto the scene was incredible,” explained Covel. “We watched women get excited about expressing their fashionable side while enjoying an activity that they had come to accept as separate from that. We listened, we learned, we grew quickly.

“We have really built a great community of women through this brand and supported women’s golf through our various initiatives such as sponsoring Women’s Golf Day and hosting NCAA tournament events. Golf is a passion for me, but so is fashion and through SwingDish’s success I’ve learned that I’m not alone in that.”

After the recent addition of a men’s line of sporstwear, the company was able to forge an alliance with the award-winning Traveling Golfer golf and lifestyle television show to become its Official Apparel Sponsor.

“This year is a big year in particular for us with our launch of Covel and we are excited to see where my team can take this brand,” commented the founder of both the men’s and women’s lines. “We feature the same feel-good, high-performance, luxury, tech-fabrics people have come to expect from SwingDish, but designed with men in mind. I’m hoping this line quickly becomes a favorite and begins to build its own community.”

As Official Apparel Sponsor of the Traveling Golfer, show host Tony Leodora will wear the Covel line of golf apparel in the upcoming episodes.

Now in its sixth year, the award-winning Traveling Golfer television show airs as a scheduled weekly feature show on NBC Sports and NBC Sports + throughout four markets in the Northeast and Mid-Atlantic regions. NBC Sports airings are 10:30 a.m. on Sundays, 10 p.m. on Tuesdays and 11 a.m. on Thursdays. NBC Sports + airs the show at 8 p.m. Mondays and Fridays. In addition, the show airs nationally, three times every day, on the new Fun Roads Network (funroads.tv/schedule) – in the San Francisco, Los Angeles, Las Vegas, Salt Lake City, Wichita and Detroit markets. Major expansion of the Fun Roads Network will be announced in September.

The Traveling Golfer also airs a number of times each month on “Rivertalk” on HTC-4 in Myrtle Beach.