The OMEGA Celebrity Masters Begins an Exciting Week of Golf 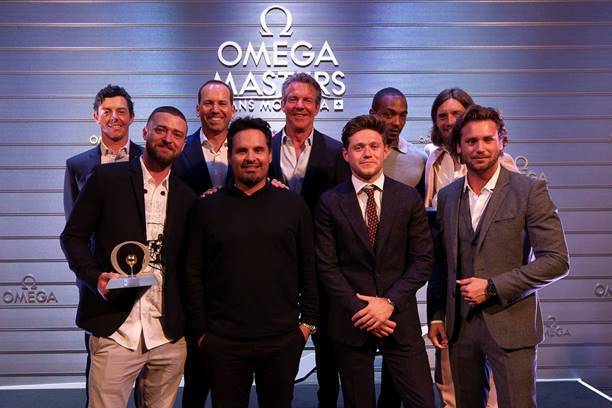 The mountains of Switzerland are usually seen dusted with snow. But this summer, as the OMEGA Masters gets ready to begin, the peaks in Crans-Montana have been glistening with golfing talent and a few celebrity superstars.

As the title sponsor of this week’s famous tournament, OMEGA held its annual OMEGA Celebrity Masters competition during Wednesday’s Pro-Am.

Out on the course were OMEGA’s own professional players including Rory McIlroy, Sergio Garcia and Tommy Fleetwood. But they weren’t the only talents in the spotlight. Joining their teams were Justin Timberlake, Niall Horan, Dennis Quaid, Anthony Mackie and Michael Pena.

While they all showed their flair with a golf club during the Pro-Am, OMEGA was proud to later present Justin Timberlake with the OMEGA Celebrity Masters trophy, for achieving the group’s best individual score on the day.

The presentation took place at an evening event in a spectacular alpine setting. There was a musical performance by OMEGA friend and Swiss rock star Bastian Baker to kick-start the night, while Raynald Aeschlimann, President and CEO of OMEGA, was proud to be joined by the players and celebrities on stage.

He said, “It’s a true honour to be joined by Rory, Sergio and Tommy this year. We’re so excited about seeing them play in the OMEGA Masters, and it’s especially fantastic to have our celebrity friends here with us too. This tournament gets more exciting every year.”

Now, the attention turns to the OMEGA Masters, being played From Thursday until Sunday. The tournament is renowned for its heritage, famed winners and majestic mountain scenery. OMEGA has been the title sponsor since 2001 and is fulfilling the role in 2019 for the 19th time.