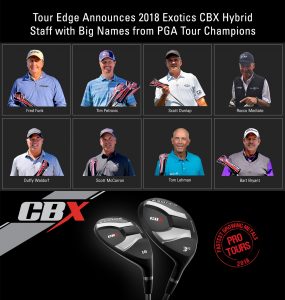 Tour Edge Golf, Golf’s Most Solid Investment and the makers of the fastest growing metalwoods on the pro tours with its Exotics CBX family of clubs, officially announced today the formation of its 2018 staff of PGA Tour Champions athletes playing their Exotics CBX hybrids.

“What a staff of legends of golf that we have been able to put together to start off our long term commitment to servicing the PGA Tour Champions!” said Tour Edge founder and President David Glod. “The best part about signing these big name golfers to our staff is that each of these players had already chosen to play the Exotics CBX due to their own personal performance needs.”

Exotics CBX are now the fastest rising clubs on the PGA Tour Champions. Twenty-five different Champions players have put Exotics CBX into play in just a dozen events while over 75 different Exotics CBX metalwoods have been recorded in play by the Darrell Survey over the first seven events of the 2018 season.

After seven events on the 2018 PGA Tour Champions season, Exotics CBX metalwoods have been in play for one win, three runner-up finishes, seven Top 5 and 15 Top 10 finishes.

“This is a great way for Tour Edge and our Exotics line to be able to get the word out there that we make the very best fairway woods, hybrids and iron-woods in the game and that the Exotics CBX is especially worthy of attention of the best players in the world,” said Glod. “The fairway woods and hybrids are the first ever to combine a Titanium face combo brazed onto a steel body with a carbon fiber sole. They are long, spin-killing machines with a clean look and a top-notch feel and sound.”

Bart Bryant
Bryant was born in Gatesville, Texas, the son of a Baptist pastor. He attended New Mexico State University, where he was a two-time All-American golfer. Bryant is a 3-time PGA TOUR winner and won his first PGA Tour Champions event at the 2013 Dick’s Sporting Goods Open, making him the 1,000th winner in Champions Tour history.

Scott Dunlap
The valedictorian of his class at Sarasota High School, Dunlap accepted an athletic scholarship to play for the Florida Gators men’s golf team, where he was recognized as a first-team All-SEC selection, an All-American, and the Golf Week Male Amateur of the Year. He went on to win two Web.com Tour events and a PGA Tour Champions event in 2014. He is regarded as one of the best ball strikers in the world, currently ranking 7th in that category on the PGA Tour Champions. He currently ranks 16th on the Charles Schwab Cup standings.

What’s in the Bag? Dunlap was the first player to commit to joining the Exotics hybrid staff, putting the club in play at the Boca Raton event, the 2nd event of the season. Since then, he has earned two Top 10 finishes, including a runner-up finish at the Cologaurd Classic in Tucson. Dunlap plays an 18-degree Exotics CBX hybrid with an Aerotech shaft and has also had the Exotics CBX fairway wood in tournament play this year.

He currently ranks 28th in the 2018 Charles Schwab point standings.

What’s in the Bag? Funk plays a 17 degree Exotics CBX hybrid with a Fujikura Pro 95 staff. He finished 3rd in Boca Raton, his first event putting the hybrid in the bag.

Tom Lehman
Lehman’s tournament wins include one major title, the 1996 Open Championship; and he is the only golfer in history to have been awarded the Player of the Year honor on all three PGA Tours: the regular PGA Tour, the Web.com Tour and the PGA Tour Champions.

What’s in the Bag? Lehman is playing an 18 degree Exotics CBX hybrid with a Project X HZRDUS BLACK 105 and has also played a 15 degree Exotics CBX fairway wood this season. He has had Tour Edge in the bag for his last six events, first putting it into play at the Boca Raton Championship. He has earned one Top 10 finish and three Top 25 finishes in that time.

Scott McCarron
He was a member of the golf team at UCLA, graduating in 1988. McCarron did not transition right away from the college to the professional ranks – he gave up golf for four years to work with his father in the family clothing business. He turned professional in 1992 and joined the PGA Tour in 1994.

McCarron won three times on the PGA Tour, with his victories coming in 1996, 1997 and 2001 and was featured in the top 20 of the Official World Golf Ranking. He has won six times on the PGA Tour Champions, including one senior major, the 2017 Constellation Senior Players Championship. He finished 3rd in the Charles Schwab final standings last year after winning four times.

What’s in the Bag? McCarron has a runner-up finish so far this season playing his Tour Edge Exotics hybrid and has collected three Top 10 finishes. He plays a 19 degree Exotics CBX with an Aldila Tour Green 105-gram shaft.

What’s in the Bag? He switched to Exotics at the Colorguard Classic and finished 5th at the event. In the event after, the Toshiba Classic, he finished 6th.Mediate is playing both an Exotics CBX hybrids and fairway wood. The Exotics CBX hybrid is a 19 degree with a Fujikura Pro 95 X shaft.

Tim Petrovic
Petrovic was born and raised in Northampton, Massachusetts, winning the 1986 New England Amateur and the 1988 Connecticut State Amateur. He now lives in Austin, Texas with his wife and two daughters. He enjoys traveling to golf events in his RV with the family in tow and most likely with The Doors playing on his RV stereo. Petrovic won one PGA TOUR event, the Zurich Classic of New Orleans in 2005, and has earned over twelve million dollars in his career on the PGA Tour.

What’s in the Bag? Petrovic earned a runner-up finish this year and four total Top 25 finishes with Exotics CBX in the bag. He is currently playing three Exotics CBX clubs: a 15 degree 3-wood, an 18 degree 5-wood and a 22 degree hybrid with a UST VTS 85 shaft.

Duffy Waldorf
Waldorf attended UCLA, where he was a two-time NCAA All-America and the 1985 College Player of the Year. He was also selected for the Walker Cup. Waldorf’s career PGA Tour earnings are just under $12 million. He has been featured in the top 50 of the Official World Golf Rankings and has won four times on the PGA TOUR and twice on the PGA Tour Champions.

What’s in the Bag? Waldorf is playing an 18 degree Exotics CBX hybrid with a Fujikura Pro 95 shaft. He has been playing Tour Edge since the third event of the season, the Chubb Classic in Naples, FL.

Follow along every week on the Exotics CBX Tour Scoreboard tracker that Tour Edge has up on touredge.com and at the new Tour Edge Tour News and Staff page touredge.com/services/tournews.asp.

About Tour Edge Golf
In 1985, David Gold founded Tour Edge with a focus on offering golfers with high quality and technologically advanced golf products that were as cutting-edge as they were affordable. He is now considered one of the preeminent master club designers in golf club design and has led Tour Edge to be a Top 10 manufacturer in every club category.

Tour Edge is driven to provide the very best in forward-thinking technology and in utilizing advanced materials that are proven to perform better than the status quo. Independent robotic tests and professionals who play Tour Edge products on the PGA TOUR, PGA Champions Tour, LPGA Tour and Web.com Tour without club contracts have proven time and time again that the unique technology approach that Glod and Tour Edge have taken has set them apart from the competition. Tour Edge products have earned 10 victories and over 50 Top 10 finishes on the PGA TOUR.

All Exotics and Hot Launch clubs are hand-built in the United States and then distributed throughout the world. Every Tour Edge club comes with a Lifetime Warranty and a 30-day play guarantee.