Tour Edge set a new personal best for the number of clubs in play in a PGA TOUR event and at a Major Championship this past week at the Regions Tradition with 55 total Exotics clubs in play, according to the Darrell Survey. 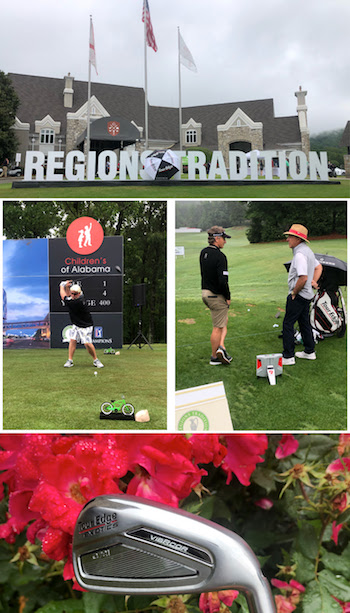 For the second straight event, Bernhard Langer and John Dally finished in the Top 10 playing Exotics irons, making for five Top 10’s for Tour Edge irons in the past two events.

Langer birdied three straight holes with sharp iron play down the stretch to pull into a tied for 6th place finish, shooting 70-69-69-71 for the event. He followed up a Top 5 finish last week at the Insperity Invitational and has now finished in the Top 10 in three straight events. His lowest finish in the five events played this year is T14.

“JD was so happy with the performance of his new clubs that when he showed up to Alabama, he told the Tour Edge Tour Department ‘I might as well be playing all your clubs,’ said Tour Edge VP of Marketing Jon Claffey. “They built him up two Exotics C721 hybrids and three Exotics EXS Blade wedges that went right into play.”

Daly was able to finish tied for 10th at the major event playing 13 Exotics, all based on the performance gains he was experiencing with the new equipment.

He ranked 5th in driving distance with his Exotics C721 Driver this week and averaged 324 yards per drive in Sunday’s round.

Another 4-time PGA TOUR winner finished on the Top 10 playing an Exotics EXS 220 fairway metal. Five of the 17 players in the filed playing Tour Edge finished in the Top 25 of the event, including Tour Edge staffer Duffy Waldorf.

The legendary #TeamTourEdge tour staff includes Ken Duke, Bernhard Langer, Tom Lehman, Scott McCarron, Tim Petrovic and Duffy Waldorf. Tour Edge products have been in play for 22 victories on the PGA Tours, including 10 on the PGA TOUR and 11 on the PGA TOUR Champions.