“At the Chubb Classic last year, I tried out their driver on the range and fell in love with it,” said Duke. “It went right into play that week, and I started working with Tour Edge on the rest of the bag. I could have played any clubs I wanted to, but these were the best performing clubs I could find for my game. Tour Edge makes really amazing product, and I am ecstatic to be joining the team this year.” 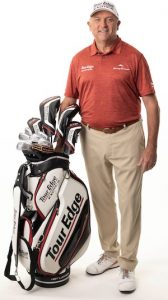 Duke was one of 20 players who chose to play a Tour Edge driver on the PGA Tour Champions last season, which made Tour Edge the fastest growing driver brand on the tour.

Duke will officially make his Tour Edge Staff debut at the PGA Tour Champions Cologuard Classic in Tucson February 26th and will feature multiple Tour Edge logos on his apparel.

“We welcome Ken to the team and thank him for helping to spread the word on how much Tour Edge has been been able to do for his game,” said Tour Edge President and founder David Glod. “To be able to grow a bag organically and purely based on performance results on the golf course is how we operate out on tour and Ken is a perfect example of that.”

Forty-two different professionals chose to play 502 Tour Edge clubs in the 15 events played on the 2020 PGA Tour Champions, helping Tour Edge break their personal best for number of clubs in play in a season, despite the shortened season.

Up to 20% of the field in a Champions event are now playing Tour Edge clubs.

Despite only having six professionals on their tour staff, over 100 different PGA Tour players have played over 1,000 Tour Edge clubs in the last three seasons on the three PGA Tours.