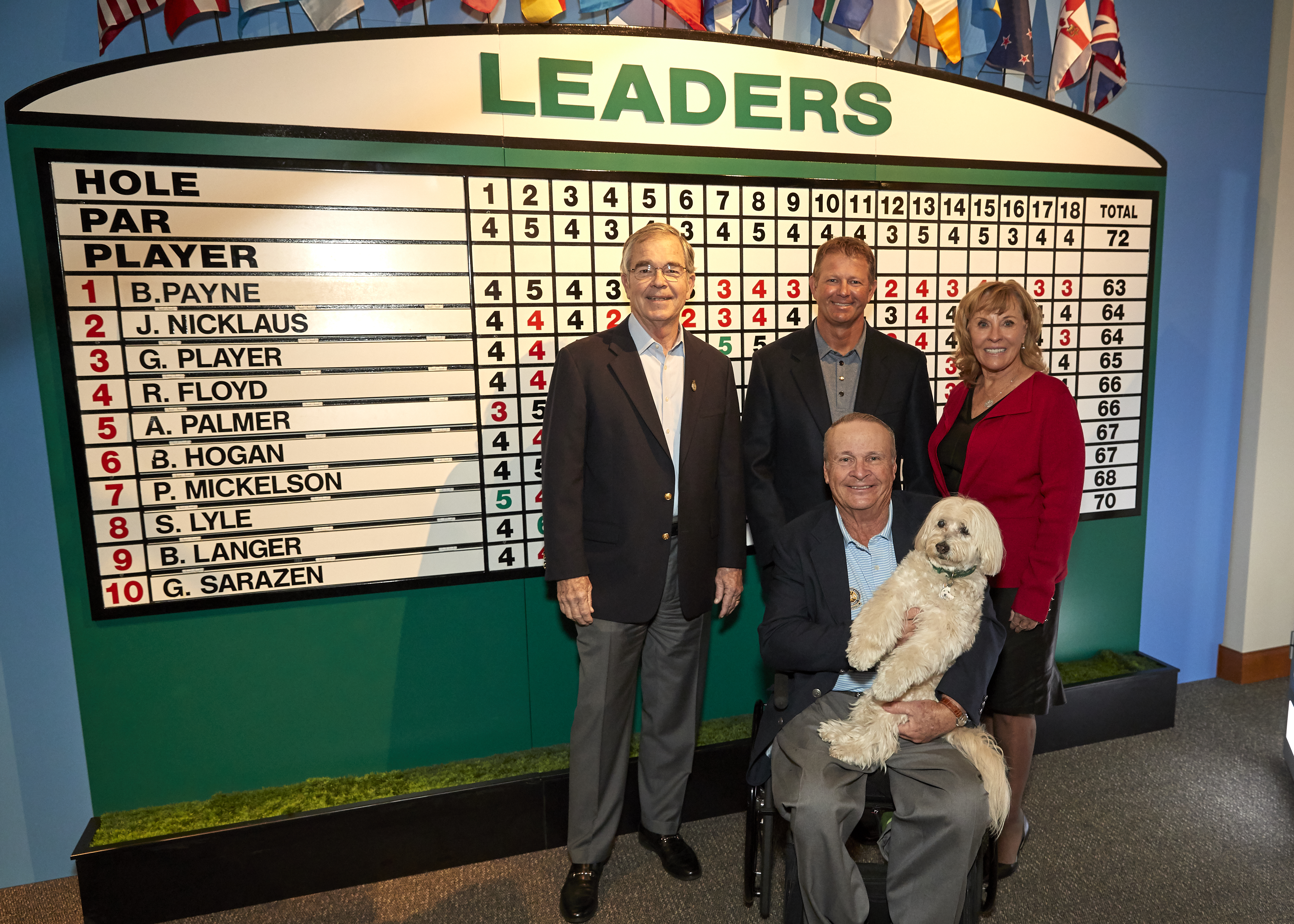 ST. AUGUSTINE, Fla. (January 28, 2019) – The Class of 2019 Inductees officially began their “Road to Induction” when they met for the first time Monday at the World Golf Hall of Fame & Museum in St. Augustine, Florida. The four living Inductees – Retief Goosen, Billy Payne, Jan Stephenson and Dennis Walters – will join the ranks of the World Golf Hall of Fame along with the late Peggy Kirk Bell during the 2019 Induction Ceremony on Monday, June 10, in Pebble Beach, the week of the U.S. Open Championship.

Together, the five Inductees will bring the Hall of Fame Member total up to 160.

During their initial meeting, the Class of 2019 shared stories from their legendary careers as they toured the World Golf Hall of Fame & Museum. While visiting, all four expressed their excitement in anticipation of their upcoming Induction.

“It’s extraordinary to be in the World Golf Hall of Fame,” said Payne. “I reflect back on the journey and how I got here. It’s pretty simple – I had the opportunity to lead what may be the finest organization in all of golf, and most importantly, an organization which has an unparalleled staff and members who became my best friends and didn’t want me to fail. And because they didn’t, I’ve ended up here in the Hall of Fame.”

“It’s a great honor to be with all these great past champions and people who have done so much for the game of golf,” said Goosen. “For me to be inducted is a great honor. I’m pretty proud of myself that what I’ve achieved in this game has got me this far.”

During the visit, the Inductees reflected on their successes on and off the golf course, how they would like to be remembered, and their emotions about standing alongside the game’s greatest players and contributors as members of the World Golf Hall of Fame.

“One of my most memorable moments was when Ray Volpe – the LPGA Commissioner at the time – came to me and asked if I would be the new image of the LPGA,” said Stephenson. “It definitely changed everything for me.”

“When people look at my career, I’d like them to remember that I had a good spirit and I wasn’t going to give up,” said Walters. “I’m hoping that’s contagious.”

The World Golf Hall of Fame 2019 Induction Ceremony will be staged at the Sunset Center in Carmel-by-the-Sea in California on Monday, June 10, kicking off the week of the U.S. Open Championship.

Photos and b-roll footage of the visit and Inductee interviews are available for download. For more information about the Class of 2019 Inductees and Induction Ceremony, visit www.worldgolfhalloffame.org.

Retief Goosen, South Africa  Male Competitor Category  Known affectionately as “The Goose,” Retief Goosen sat within the Official World Golf Ranking’s top 10 for more than 250 weeks from 2001 through 2007. His 33 worldwide wins include two U.S. Open Championships in 2001 – the same year he was named European Tour Player of the Year – and 2004. Goosen led the European Tour Order of Merit in 2001 and 2002. He also played in six consecutive Presidents Cups from 2000 to 2011 as part of the International Team.

Billy Payne, United States  Lifetime Achievement Category  During his 11 years as Chairman of Augusta National Golf Club from 2006 to 2017, William Porter “Billy” Payne oversaw a number of significant achievements including the introduction of female members into the club’s membership. He originated the Drive, Chip & Putt National Championship with the USGA and PGA of America and established the Asia-Pacific Amateur and Latin America Amateur tournaments, each offering guaranteed Masters’ spots to the winners. Named the GWAA’s William D. Richardson Award recipient, Payne also received the Olympic Order after serving as president and CEO of the Atlanta Committee for the Olympic Games from 1992 to ‘96. Continuing his legacy and involvement with the Olympics, Payne was a key figure in the successful return of golf to the 2016 Games.

Jan Stephenson, Australia  Female Competitor Category  In her first season on the LPGA Tour in 1974, Jan Stephenson was named LPGA’s Rookie of the Year. She went on to lead an impressive career with 20 professional victories, including 16 on the LPGA Tour. She is a three-time Major Champion with wins at the 1981 du Maurier, 1982 LPGA Championship and the 1983 U.S. Women’s Open. Her impact on the game extends outside of her play as one of the founders of the Women’s Senior Golf Tour. She is involved with golf course design and has made many charitable contributions including being an honorary chair of the National Multiple Sclerosis Society. Stephenson was also honored with the Order of Australia Medal in 2018 for her contributions to the game of golf.

Dennis Walters, United States  Lifetime Achievement Category  Dennis Walters is an elite golfer who was paralyzed from the waist-down at the age of 24 following a golf cart accident. He has since dedicated his career to sharing life lessons and inspiring fans and disabled golfers of all ages through golf clinics and special performances at more than 3,000 worldwide appearances. Former spokesperson and national ambassador for The First Tee, his message is to always continue hoping and dreaming. He is one of only 11 honorary lifetime members of the PGA of America. Walters was also honored with the 1978 Ben Hogan Award and was a 2018 recipient of the USGA’s Bob Jones Award.

Peggy Kirk Bell, United States  Lifetime Achievement Category  Margaret Anne “Peggy” Kirk Bell took up the game as a teenager, making a name for herself as an amateur star. She went on to become a charter member of the Ladies Professional Golf Association in 1950 after winning the 1949 Titleholders Championship and participating on the winning 1950 Curtis Cup team. She received the PGA of America’s First Lady of Golf Award in 2007 and was an avid supporter of the game as a top 100 golf instructor, becoming the first woman selected into Golf Magazine’s World Golf Teachers Hall of Fame.
***

About the World Golf Hall of Fame & Museum

The World Golf Hall of Fame & Museum celebrates golf and preserves the legacies of those who have made it great. The Hall of Fame & Museum, located at World Golf Village in St. Augustine, Florida, serves as a steward of the game through engaging, interactive storytelling and exhibitions featuring artifacts, works of art, audio, video and photography significant to the history of golf and its members. The Hall of Fame is a 501(c)(3) nonprofit institution and is allied with 26 national and international golf organizations, including The European Tour, LPGA, the Masters Tournament, PGA of America, PGA TOUR, The R&A and USGA. To learn more about the World Golf Hall of Fame or to lend support, visit www.WorldGolfHallofFame.org.