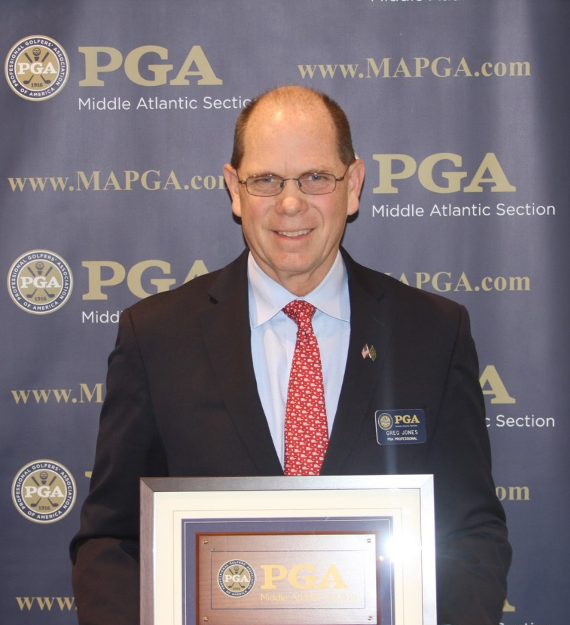 Congratulations to Greg Jones, PGA of Baltimore CC, who was honored with the 2020 President’s Award at the MAPGA Spring Meeting. Greg was picked personally by MAPGA President Josh Tremblay for his continued support of Section programs and events, and for his tireless effort and dedication to the game of golf.  He will be honored at the MAPGA Hall of Fame/Awards Banquet with the other award winners on March 21st. 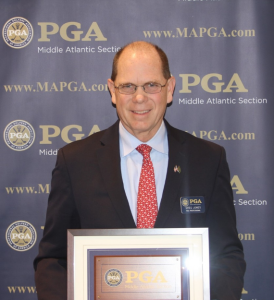 Greg Jones was born in Baltimore, MD and was introduced to golf by his Father at the age of 13 by taking him to play at the Mount Pleasant and Clifton Park Golf Courses. His first job in the industry was working as a range boy at the Elkridge Club. After attending golf school in Florida, he moved to Hunt Valley Golf Club where he worked for 25 years, starting on the range and in the bag room where he learned from his mentor John Haines, PGA (MAPGA Hall of Fame Class of 2004). Greg was elected to PGA Membership in 1989, the same year he became the Head Professional at Hunt Valley.  He accepted his current position as Director of Golf at Baltimore Country Club in 2003. Through Greg’s leadership and collaboration, the Baltimore Country Club’s Caddie Program developed the first Evans Scholar from the state of Maryland.  He was instrumental in growing the caddie program and coordinating efforts from the BCC membership and the Western Golf Association.  Additionally, he is heavily involved in the First Tee of Baltimore where as many as 20 First Tee children are caddying each summer at BCC.  He has been instrumental in hosting many MAPGA events at Baltimore Country Club.  Greg epitomizes what is means to be a PGA Professional.  He has been a role model in the community as well as giving back to his association and facility.