The routing of the Diablo Country Club golf course is a testament to the legendary gentlemen who designed this uniquely historic course. In 1915, 23-year-old two-time California Amateur Champion Jack Neville designed his first golf course, creating the original nine holes at Diablo. Building on this success, Neville’s second design was none other than the original Pebble Beach Golf Links. In 1920, designer William Watson, one of California’s most successful and prolific golf course architects in this Golden Age of golf course design, created the second nine at Diablo, crafting most of Neville’s original holes into this new 18-hole course. Watson’s next assignments were designing The Olympic Club and Harding Park, both in nearby San Francisco. By the end of the 2020 season, 12 major championships will have been played on courses originally designed by these two golf legends. Diablo Country Club is quite unique in this regard, as it is the only golf course in the world to showcase the designs of both Neville and Watson.

Diablo’s renovation project has seen a comprehensive update of every feature. This includes fully renovated new greens and green surrounds, both resurfaced to the latest improved bentgrass, which will provide the ultimate playing surface. In many instances, greens were restored to their original size, restoring lost hole locations. All other turf was converted to drought-tolerant bermudagrass, and overall maintained turf acreage has been reduced by more than 35 acres. The majority of these reclaimed natural areas are being restored to drought-tolerant fescue and native grasses, or the California Oak understory is being returned to its natural state. All bunkers have been recreated, with many restored to their original locations. All tees have been built to a more natural shape and contour, as originally designed. The backbone to all of these improvements, however, is a new irrigation system. This state-of-the-art system will yield significant efficiencies in water use and aid in providing the ultimate in golf course conditioning. 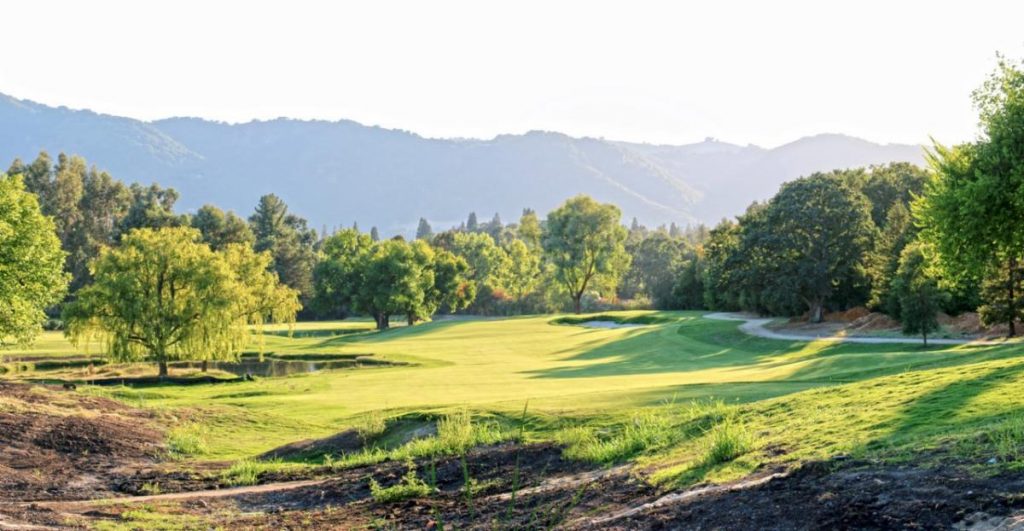 Yet, the original masterful routing has remained as it always has been, so members today can experience playing this historic gem in the way it was intended, over a century ago. The Origins’ team of Todd Eckenrode and Andy Frank have spent countless hours in the field during construction, directing every critical feature to honor and maintain the essence of this quintessential course which reflects back to the Golden Era of Golf Course Design.

“The Club’s leadership has been outstanding, providing ourselves and the construction team great freedom in the process, which will lead ultimately to the utmost possible design and finished golf course for the members to enjoy for decades to come”, says Todd Eckenrode. “I can’t say enough about course superintendent Ryan Nicholson and his team’s efforts and talent as well, as they have contributed tirelessly in the construction, while also growing-in the first phase of holes, which are looking fantastic.” Ryan and his consulting agronomy team, also made the decision to build the greens to the variable depth method of USGA construction, and the results seem to be outstanding.

“This project has given us a wonderful opportunity to provide Diablo Country Club with the infrastructure and agronomic conditions that will position the golf course well into the future. Converting to hybrid Bermuda grasses in the fairways and roughs, reducing the overall irrigated acreage with oak mulch beds and native grass plantings, as well as upgrading to a state-of-the-art irrigation system, will allow us to significantly reduce water consumption while providing more consistent playing surfaces”, says Ryan Nicholson.

The construction team consists of general contractor Landscapes Unlimited, irrigation contractor Foremost Construction, and the talented team of independent shapers including Matt Flint and Brett Hochstein, with Joe Hancock, Scott Clem and Matt Smallwood lending a hand as well. Shaping has been completed on all 18 holes and grassing will conclude shortly, with the outer area and creek fescues to be seeded immediately thereafter.

Our goal at Todd Eckenrode – Origins Golf Design is to deliver a golf course of the highest quality that is reflective of our intense level of dedication, our beliefs in time-tested classical design, and our love for the game of golf. We believe that every golf course must have its own personality and identity, creating a sense of place that is unique. We work diligently to expose this underlying identity through our design, allowing it to shine through in the end. Our belief in crafting all features of the golf course in the field, from the ground up, brings a high level of detail to our work and further distinguishes each course.

High-resolution images may be obtained by contacting Todd Eckenrode directly at todd@originsgolfdesign.com.